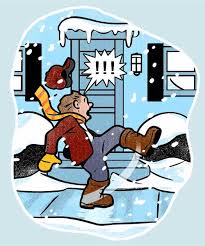 As we settle into winter, it is an appropriate time to revisit the issue of liability from slip and falls (S&F). As mentioned in prior Cleary Quarterly articles, Massachusetts laws have changed, making it easier to establish liability to those involved. As such, we are seeing an increasing number of slip and fall claims filed against our clients. When someone is injured, who is responsible?

S&F claims can be quite large and long-lasting claims. When a person is initially injured, the extent of the damage, medical bills, possible lost wages and other pain and suffering are unknown and therefore a personal injury attorney will often wait as long as possible before filing a lawsuit against the potentially responsible parties. However, it is always a good idea to gain knowledge about how to claim for slip and fall even before visiting the attorney!

As an example, Mr. Smith is walking into a local restaurant and slips on ice. After Mr. Smith falls and injures himself, he or his attorney may identify several potentially responsible parties. Those responsible might be the restaurant, the property owner or a snow removal contractor if one is used. All three will need to notify their General Liability insurance carrier and potentially, three different carriers will then post a reserve on their insured’s file be it the restaurant, the property owner and the snow removal contractor.

All three carriers then will wait to hear from Mr. Smith’s attorney. These losses can sit for several years before the actual suit arrives to allow the loss to grow. Meanwhile all three parties are paying premiums based on the assumption that their insurance is responsible and this can raise the rates for all three.

To avoid this scenario, consider the following risk management steps:

The end result after a slip and fall is the easy identification of which party will handle the claim and allow the other two parties to protect their loss history and future premiums. This subject deserves close attention by all three parties to make sure they know where they stand after someone falls.

http://www.clearyinsurance.com/wp-content/uploads/Cleary_Logo.jpg 0 0 Carol LaCombe http://www.clearyinsurance.com/wp-content/uploads/Cleary_Logo.jpg Carol LaCombe2020-01-24 14:31:582020-01-24 14:32:09Slip and Falls: Where Do You Stand?
Cadillac Tax and Other Key ACA Taxes RepealedInvesting for the Long Haul
Scroll to top