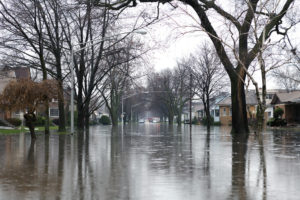 Flood Insurance is one of those things you might not think about — until you’re knee deep in muddy water in your living room. At that point, it’s too late. you’re left with moldy furniture, ruined flooring, and probably a big replacement cost. Almost 87% of homeowners don’t have flood insurance.

Did you know most homeowner policies exclude coverage for the peril of flood.

It’s a good idea to look into flood insurance no matter where your home is located — whether that means you live in an area with little rainfall, miles away from swelling rivers and lakes, or in a zip code that falls safely outside a flood zone. In fact, over the last 5 years, all 50 states have experienced floods or flash floods. Flood policies make especially good sense when you consider the average individual flood claim amounts to more than $20,000. Flood Insurance can be purchased for properties both inside and outside the highest risk areas. Floods can strike without warning. Most policies take 30 days before they go into effect. You cannot wait until an alarming weather forecast or warning to purchase coverage.

Is Your Business Prepared for a Natural Disaster?5 Questions to Ask Clients Who Are Considering a 401(k) Loan
Scroll to top