Flood insurance has been an afterthought in most Americans’ minds when it comes to insuring property. Well, folks…the time has come for us to re-think the way we view flood insurance-more importantly, how we define and imagine flood. Here are some quick flood facts: 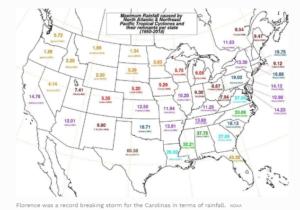 When a hurricane is approaching, the first thought about damage that comes to mind is damage from wind and coastal flooding. This could be damage to homes and businesses due to the heaviness of the flooding, which may result in commercial roofing companies in Denver, or wherever the flooding hit, to be called in so they can survey the area and remodel it so it is stronger and safer. Did you know that flooding is the most common, costly, severe, and deadly weather-related natural disaster in the country? Additionally, did you know that a property does not have to be near water to flood? As a matter of fact, if you live in an area with low or moderate flood risk, you are five times more likely to experience a flood than a fire in your home over the next 30 years! More than 20 percent of all National Flood Insurance Program flood claims come from outside of high-risk flood areas. Floods can result from storms, melting snow, hurricanes, drainage system backups, broken water mains, and changes to land from new construction, among other things.
Heavy precipitation is becoming more intense and more frequent across most of the United States, particularly in the Northeast and Midwest. Extreme precipitation is related to climate change, due to a warmer atmosphere that can “hold” more water vapor, and therefore deliver more rainfall.

The Tides (and Sea Level) are Changing

Sea levels are rising. Regardless of what side of the “Climate Change” fence you’re on, there’s no denying that sea levels are rising and storms are becoming more frequent and volatile. Global sea level has risen approximately 7–8 inches since 1900, with about three of those inches occurring since 1993. The current rate of rise is a little more than an inch per decade. To take that a step further, take a look at how this has impacted the Northeast specifically:

Preparedness & Recovery
The most important thing you can do in the event of a flood or flash flood is to avoid the impacted areas. You may also need to keep in touch with experts who could help you Get the best in water damage restoration. Our familiarity with rain and water creates a different risk perception, but it should not be taken lightly. We have a tendency to overlook and internalize what 20+ inches of rain would look like in our daily activities, since it’s something most of us have never experienced. However, when you find yourself in a flash flood or flood area, you can take these helpful measures to avoid further loss of property or life: